You have an idea for site or have a suggestion to make it better? Post here.
Post Reply
8 posts • Page 1 of 1

Hey-
Maybe it would be a better idea to let the Unown rotate daily or every 2-3 days instead of weekly? Because this is the third time already, I believe, that I see a letter that we already had. And it's not hard to scratch 100 coins together in a day or, even if someone missed it, it'll come back anyway. It's just more boring than it already is and frustrating to see duplicates in there after over two months and we're only having seven different forms right now.

(Sorry for the clumsy post. I just woke up xD)
Please only DM me, if necessary. I have really bad anxiety. 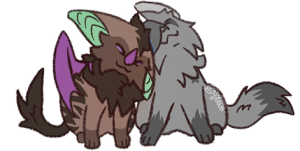 I am biased cause I dislike dailies, and I do not find getting 100 coins a day easy (with just coin flip available). But a faster rotation doesn't really solve the problem of duplicates. As well, even though it would allow duplicates to go by quicker, it would just stress out casual players more. Or at least it would me trying to keep up with the faster pace, I can't speak for everyone else.

Perhaps just having some sort of tracking that prevents any of the previous X-number (5-ish? for unown) from coming up again? That would decrease the number of recent duplicates you'd see, and for a fresh prize rotation would keep it fresh for longer. And would still keep some difficulty of getting those final few forms if RNG wasn't nice :3
Tango's Trade Station
═══════»«═══════

I would like to dig this out again, since we have the Match game now, where you can get 100 coins from a single round of Match, which should make it easy and more accessible to collect 100 coins per day.
Weekly Unown with possible duplicates just... ain't it.
Please only DM me, if necessary. I have really bad anxiety.

Even assuming that every Unown type cycles through without repeats, which it doesn't, it would take 28 weeks minimum to go through them all. That's half a year. But they're repeating, so it'll be indefinitely longer based on the probability of randomness.

Praise be to fairy types.
Top

Doesn't change my thoughts above. Making the cycle faster doesn't fix the actual problem of rapid duplicates. But onboard with trying to improve it :3

Indifferent to reducing the rotation a few days

-1 to making it a daily rotation

I agree that making them change too fast might add too much pressure. Reducing duplicates might be nice, but what if you end up being the one user that wants to collect a certrain letter? Or you want to help a friend completing his alphabet. Or maybe you want to collect the letters to write your username ... or you are planning to propose to your future wife by unown-alphabet on virtuadopt XD
I'm exaggerating of couse, but I can see a couple of situations were it would be kind of annoying not having duplicates. So what about having three random unowns to choose from for a certain amount of time until they reset and you get three new ones. Would make it faster to get all of them while still having the chance to get multiple versions of the same letter.
Top

I don't think that's too much of a worry as long as it is not a daily (or even 2-3 day) rotation. You can buy multiple at a time after all, and buying a bunch of the same unown over the course of a few days is very feasible with the Match Game around.

Anything shorter than 4 days for rotation is too short for those that can't be on everyday. And would still be inconsiderate of those who only have time on weekends. Not sure how many users are like that though.
Tango's Trade Station
═══════»«═══════

+1 for daily changes. Or changes every two to three days.

Because let's be real, if I'm on the hunt for specific Unown, i can now prepare for them with the insanity Match when I have the time to play, and if I really want specific Unown, I will be able to log in for a minute to grab one when it's available. If the Unown rotate daily, but still have the possibility to be a duplicate, it will still take a new user at least a month to grab them all, likely more - but that's a huuuuuge upgrade to at least 7 months it would need with weekly switches.

(And even if you didn't prepare coins in advance, a single game of Insanity Match shouldn't take much longer than 5 minutes. Tested a round, won in 3 minutes.)

Imagine you have to wait half a year for the Unown you missed in the week you were on vacation because afterwards, it just refuses to be part of the weekly (still likely duplicate, but wrong duplicate) rotation. Doesn't that sound way worse then waiting ~2 to 4 weeks before you see that specific letter again?